Varia zoosystematica profundorum from Ingrid Ladurner on Vimeo.
Posted by Generative at 07:33 0 comments 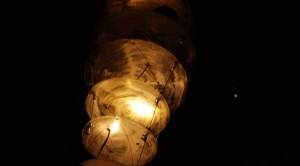 From a depth of ca. 700m down, the sea is completely dark, the only light sources being bioluminescent animals; it is plausible to assume that much communication in this habitat is acoustic. Inspired by the work of Louis Bec and Vilem Flusser, we created models of this communicative behavior: A number of actants ("creatures") transmit symbols ("letters") to each other, assemble them into longer chains ("words"), and sometimes express these words by emitting sound, light, or motion patterns. Some creatures generate rhythmic pulse sequences, some almost melodic phrases. Others let hues of colors flash over their skins, while others again float up and down in space in response to the conversation between them.

This exhibition is part of the SUPERCOLLIDER SYMPOSIUM 2010 {SOUNDING CODE}, in cooperation with singuhr e.V.

The SUPERCOLLIDER SYMPOSIUM 2010 is an event of the Deutsche Gesellschaft für Elektroakustische Musik (DEGEM) e.V.
It is realised with funds from Hauptstadtkulturfonds.
Kindly supported by UdK Berlin, TU Berlin, Bezirksamt Pankow / Berlin, Förderband Kulturinitiative and .HBC.

Marine mammals such as whales and probably dolphins are known to communicate
acoustically over large distances; by comparison, very little is known about communication in
the deep sea. From ca. 700m below the surface, the sea is completely dark, the only light
sources are animals generating light by bioluminescence. As sound carries very well in water, it
is plausible to assume that much deep sea communication is acoustic. Some species like the
fawn cusk-eel (Lepophidium profundorum) are known to develop special muscles for making
sounds during mating season, and some fish are known to make sounds by grinding their
teeth; more unknown means of sound production are to be expected.

To address these open questions, the Generative Art/Computational Art class at UdK (Prof. Dr.
de Campo), has developed models for Deep Sea communication, inspired by the work of Louis
Bec and Vilem Flusser: A number of agents simulate aspects of the communicative behavior of
different deep sea creatures. They transmit symbols ("letters") to each other which each
individual assembles into longer chains ("words"); when an agent / creature has collected a
word it deems meaningful, it expresses that word by emitting sound, light, or motion patterns.
Some creatures generate rhythmic pulse sequences, some almost melodic phrases. Others let
hues of colors flash over their skins, while others again float up and down in space in response
to the conversation between them.

Despite the remoteness of this habitat, these observable communication forms may well be
inadvertently influenced by human intervention: Songbirds are known to adopt the varying
sound patterns generated by new car alarms into their songs; Wolfgang Mueller's work
"Hausmusik" posits that the starlings now living near Kurt Schwitters' summer house in
Norway sing variants of Ursonate segments learned by their ancestors who have listened to
Schwitters practicing the Ursonate (and possibly being influenced by them as well).
Submarines have been present in the deep sea since World War I, communicating by
radio/encrypted morse; as sea animals may well have electromagnetic senses, and deep sea
magnetic ore might well decode electromagnetic transmissions into mechanical vibrations, it
seems quite likely that deep sea animals have been sensing and hearing messages as morse
code rhythms for more than 100 years. As these patterns are also very robust against interference, and thus a potential advantage in natural selection, the deep sea creatures may very well have adopted such rhythmic encoding in sound and electromagnetic waves for their own communication purposes...

Simulating aspects of animal behavior allows studying phenomena that are difficult to observe
in the wild; beyond that, given the freedom of such works in artistic contexts, one may also
find that the strangeness of the unknown reflects the human world and its subjective
experience in unexpected ways.

http://entropie.digital.udk-berlin.de/wiki/DeepSea
Posted by Generative at 02:53 0 comments

Scientific research has long been defined by the balance between observation of phenomena of
interest, theoretical predictions (abstractions derived from observation), and experimental
proof of these predictions; with the advent of computing, model-making ("simulation") has
become a strong third base for scientific exploration. In several interviews, V. Flusser defines
"reality" as a vanishing point which human experience research can asymptotically
approximate; in this sense, simulation is creating alternative realities which can be equally
valid for their respective context.

In biology in particular, this view leads to interesting perspectives: Large groups of people find
experiments with living beings ethically problematic, as they are sentient beings (the role of
perceived evolutionary proximity is interesting here). The gradualist view of modern Darwinism
finds that cutting a clear distinction between whatever cognitive or other skills define "human
specialness" and the general animal kingdom is constantly shifting: every time a new criterion
is erected, a species turns up that demonstrates the same skill.

After genomes for many species have been completely read, the idea that all relevant
information for a living being is encoded in genomes has turned out to be simplistic; this is not
a problem of genetic text interpretation. A lot of the data seem irrelevant (maybe this is
genetic code shrouding?), many phenomena happen in symbiosis with other life forms such as
pervasively present bacteria, and where higher order behavior “comes from” is even more
unclear (e.g., the idea that one could find a "homosexuality gene" is very naive).
Since Popper, scientific theories are not absolute truths, but temporarily considered the best of
our knowledge, and only correct until falsified. For possible epistemic strategies, Considering
how many formerly absolute truths have been toppled already, this calls for more epistemic
humility. One new heuristics based on these insights is to assume less and hypothesize more,
ideally in falsifiable ways - Speaking with Robert Musil, one can develop a sense of the
possible, a “Möglichkeitssinn”.

This is the background for the approach of the present work, which could be called exploratory
or simulative zoosystematics. Of course the pioneer work by Vilem Flusser and Louis Bec
haven been major sources of inspiration here; however, rather than modeling individual specimens in rich detail, we have concentrated on modeling their shared behavior, mainly
commonalities in communicative behavior across species.

We posit that the basic pattern of communicative behavior shared across species in the
environment we model works as follows:

• An individual waits for incoming elementary signals, be they acoustic, light, or
electromagnetic radiation. As each individual generally often also sends such signals,
there is a relatively constant stream of signals coming in.
• Of these signals, it collects those it finds interesting, based on its own set of
preferences (which can be personal or species-based, or both)
• The signals it keeps in short term memory are arranged into longer strings of signals,
based on local context (i.e. an already assembled partial message in working memory).
• When it deems a word complete, that word is expressed in some form: as a sound
pattern, as light hues flashing over the animal's skin, as a rhythmic motion pattern, as
electromagnetic radiation patterns, or as combinations of several modalities.

This produces a characteristic distribution of activity: When one observes an individual being, it
will seem largely inactive most of the time; however, an observer sees and hears light and
sound patterns by other animals nearby. When the observed animal becomes active, its sound
and light patterns will be both individualized (it chooses its own preferred style of self-
expression) and shared: some properties, like distance patterns in what could be called
expressive parameters, and especially relationships in time patterns (“rhythms”) will reveal
themselves to the attentive observer.

Sending signals and full messages costs energy; receiving them generates energy within each
animal. When its energy sinks very low, it goes into a hibernation-like mode where it does little
until it reaches high energy again; at high energy, it becomes hyperactive until its energy is
near its average again. Within the group interaction, this leads to overlapping cycles of activity
that create remarkable variety in the overall sound/light-scape of activity.

Note that for this modeled behavior, the precise nature of the individual atomic signals and
their assemblages, as well as their meanings, are irrelevant: to observe communication
behavior in a general sense, it is not necessary be able to understand the details. Thus, for
practical reasons of simplifying understanding, we chose alphabetical letters as the individual  signals, and strings of letters as full messages (“words”).

We further posit that there is second level of “objects of interest”: Each animal is assumed to
have a background of several “magic words” it finds particularly attractive; incoming “word”-
messages are compared to these magic words, and when they are similar enough, lead to
heightened activity - this mode has been affectionately nicknamed “song and dance”, or “party
mode”.

The behavioral richness of a modeled submarine communication ecosystem is quite rewarding
for the careful observer: One can switch perspectives between activity at different distances.
Here, the similarity of the location the piece has been developed for (Grosser Wasserspeicher
Berlin) to the deep sea has been inspirational: it is very dark, very quiet, and has very long
reverb decay. This preserves sound energy so well that one can still hear sounds from 100m
away in the silent phases of the nearer creatures.

Maybe the most interesting insight is that even with large species-based and individual
differences in expression of the discourse of messages, a careful observer can develop a fine
ear for the shared vocabulary of elements.

Many aspects of the models have only been touched, and warrant further consideration:
Some individuals have only been sketched roughly, and fleshing out more details will make the
overall ensemble behavior richer.

The animal's reactions to environmental influences are quite simple at the current state of
development – in essence, most of them find intrusive observers a source of irritation. Here, a
mix of curiosity and reluctance could produce intriguing interactions, not just with their known
habitat neighbours, but outside influences too.

Introducing long-term memory is quite likely to produce interesting longer cycles of behavioral
evolution; logging long runs of ensemble activity will create very rewarding material for
analysis, generating further ideas for next directions to experiment with.
Posted by Generative at 03:03 0 comments